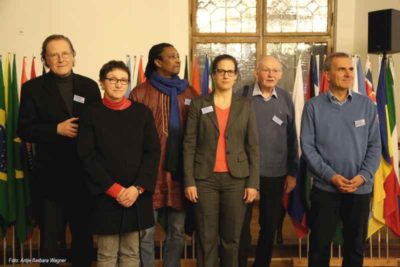 Documentation of all contributions of the conference 2015

Contributions to the 2015 Peace Conference:

Does the peace movement play no role in the leading media? Lecture by Dr. Uwe Krüger on 5.2. 2015. Video recording

Author of “Opinion Power. The Influence of Elites on Leading Media and Alpha Journalists”.

Article in “Neues Deutschland” of April 1. 2015 with a brief summary of the study

Introduction by Thomas Rödlon 5.2. 2015: The Munich Peace Conference and the Süddeutsche Zeitung.

Compilation of reports on the peace conference: Doku IMFK-SZ

Moderated by Clemens Ronnefeldt on 6.2. at the International Forum

Prof. Dr. Joachim Bauer, Freiburg Violence is not a law of nature

Human aggression and peace skills from the perspective of brain research.

Author of “Principle of Humanity” and “Pain Threshold

Greeting from the City of Munich: Beatrix Zurek

Peace Officer of the International Fellowship of Reconciliation

with the speakers from the previous evening

Concept of domination or a way to secure human rights?

If states cannot protect their citizens and crimes against humanity or even genocide occur, the community of states would bear responsibility and have the right to intervene militarily – according to some.

No, say the others: with this argumentation, a population unwilling to go to war should be made to accept wars with the participation of the Bundeswehr. The responsibility to protect is only a propaganda pattern that promotes military power politics.

Observations at the Munich Security Conference 2014 by Prof. Mohssen Massarrat

Presentation of the program and goals of the Peace Conference at Radio Lora, interview with Thomas Rödl

Of news values and peace journalism

If you want to understand why certain events or topics do not make it into the news, a look at the so-called “news value theory” of communication science is helpful. Journalists are “gatekeepers” in the flood of information and must select from an overly complex range of events those that are new, important and interesting for their users. In doing so, they primarily select those events that contain as many “news factors” as possible, The following criteria increase the probability that an event will be reported on: if it is a current one, immediate event is concerned, if possible celebrities are involved in the event, it is an unusual event, there is a conflict (i.e., it is dramatic), the event has consequences for as many people as possible, and there is a certain type of proximity between the event and the media users (be it geographic, political, economic, or cultural).

One of the first to explore intelligence factors was the famous peace researcher Johan Galtung. In 1965, the latter found a total of 12 news factors in a study of crisis coverage in Norwegian newspapers. Among them were frequency (i.e., the duration of an event should match the publication rhythm of the medium), uniqueness (the event should allow for clear interpretation), and continuity (topics that have already been introduced have an easier time getting back into the newspaper). Galtung considered the following four factors to be particularly serious: elite person (when it comes to powerful individuals), elite nation (when it comes to powerful states), personalization (when the event can be attached to concrete people), and negativity (when it comes to death, catastrophe, or war).

Johan Galtung’s media research was not only concerned with describing the selection criteria, but also with changing them. For, as he later pointed out in an essay on “Peace Journalism,” the conventional selection criteria favor war and violence. The media, Galtung argues, portray the world as more conflict-ridden than it is; they tend to emphasize violent means of resolving conflicts, giving the impression that violence is more efficient than peaceful approaches to resolving them. In contrast to conventional “war or violence journalism,” which focuses on describing the arena of conflict and is elite- and victory-oriented, he postulated a “peace journalism” that also explores the deeper causes of conflicts, includes peace initiatives, and is solution-oriented.

By the way, for some years now there has been a small trend in journalism not only to present negative news, but also to deliver “constructive news” and “solution-oriented journalism”. This is also an opportunity for the peace movement. If their criticism of the military does not meet with a broad media response, perhaps the alternatives to military operations – such as best-practice examples of civil conflict transformation or reconciliation – will attract more interest in the editorial offices. But: news values (i.e., the grids in the minds of media makers) don’t change on their own. Any media user who wants more “solution-oriented” or “peace journalism” can and should make this request to journalists. Preferably in the language of nonviolent communication.

The slides of the presentation at IMFK 2015 on the Internet:

Uwe Krüger: Mainstream. Why we no longer trust the media. C.H.Beck, Munich (to be published in March 2016)